He is voiced by David Cooke.

Morton Koopa Jr., unlike most other Koopas, is dark brownish/ black rather than yellow. Like all the other Koopalings, though, he has clawed feet and hands, and he is equipped with black, spiked cuffs. His belly is armor plated and is almost white, with a slight brown tint. Morton Koopa Jr.'s shell is dark black and lined with spikes. The rim of his shell is white in color. His feet and mouth are tan, and four, long teeth protrude from his mouth. The top of his head happens to be white, and he has long, dark eyebrows. He has three long strands of hair on his head, and there is a gray star on his left eye. So he must be a fan of stars. That's great.

Morton is among the Heavyweights in Mario Kart 8 that give the best speed advantage, but the worst acceleration advantage. Due to Morton also being heavy, he is a favorite among advanced racers, being able of effortlessly pushing others out of the way while being very fast. 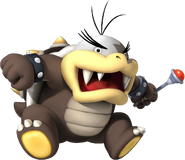