A handy item for catching up, taking a shortcut, or dodging the infamous Spiny Shell.

Gives the user a burst of speed

A Mushroom, also known as a Dash Mushroom in non-American regions, is an Item that has made its way into every Mario Kart game so far. It is based off the Mushroom power-up from some of the Mario games.

In the main Mario platformer games, the Mushroom's common effect is grows the player character into a standard size if they are small (either from starting a new game or after taking damage upon touching an enemy). This mushroom is named "Super Mushroom"to distinguish it from the other mushroom power-ups.

In the Mario Kart series, Mushrooms act as a beneficial recovery Item; they provide the racer with a quick spurt of acceleration when they use it, allowing the player to catch up with an opponent who is ahead of him/her. You can also obtain the boost by running over a Mushroom that has fallen on the track. Double Mushrooms and Triple Mushrooms are the same, but as the name implies, you get two and three mushrooms respectively instead of one.

Mushrooms can also be used more usefully in shortcuts. It's common for a shortcut to have a section of off-road track (meaning you drive slower on it). This makes the shortcut a hindrance to the racer's time, slowing them down. But with a Mushroom, the shortcut is now a benefit. Mushrooms can be used even for less complicated cuts, like going over a bit of off-road track instead of taking the usual, long way.

In Time Trial Mode, players are usually given a varying number of Mushrooms, either one, two, or Triple Mushrooms in all of the games except the first, Super Mario Kart. It mainly depends on the game you have, with most Mario Karts giving you Triple Mushrooms with the exception of Mario Kart: Double Dash!! and Mario Kart DS. The amount of mushrooms given in the former is always two, and the amount given in the latter is based on the Karts' Item stats. Mushrooms are handy when you lose all of your speed, in which they cause it to go right back up. However, they are usually triggered when there is a shortcut or piece of track the player wants to cross. Really, because, you know, it's Time Trials, and you want to get a better time.

You can steal another player's Item by running into their Kart in Mario Kart: Double Dash!! only, and getting knocked over and/or spinning out will cause the racer to lose all but one Mushroom in their inventory.

The primary goal in Balloon Battle is to hit opponents with Items so you can pop their balloons. In Grand Prix and VS, Mushrooms don't do damage when you run into enemy Karts, so to make Mushrooms worth something, you can actually steal a balloon from another player. The balloon gets added it to your collection, so long as you don't have the maximum amount. 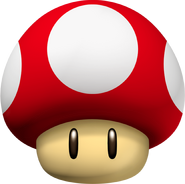 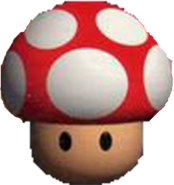 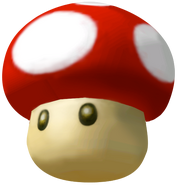 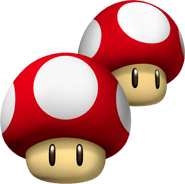 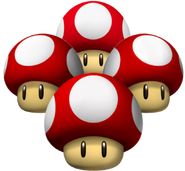