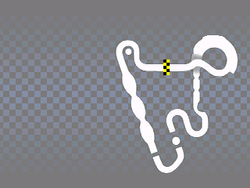 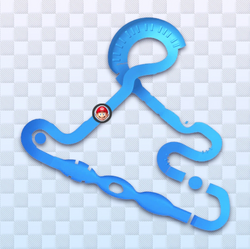 In Mario Kart 8, the staff ghost kart setup is Baby Daisy driving the Biddybuggy with Standard tires and the Super Glider.

The entire course mostly takes place on various instruments, including pianos and drums, with many other instruments, like trumpets, blowing away in the background. There are many lights, colors and sounds surrounding you. At the beginning of the course, the player must drift over three different percussion instruments, one being a xylophone. After this, the player drives through a tunnel with two Piranha Plants that seem to bop their heads to the music. Throughout the laps, the placement of the Piranha Plants change. Near the end of the course are two ramps; one of them is a glider ramp, while the other just allows you to trick off of it and land on the track along with three jumping music notes that shake the area surrounding them and can let the player trick off the ground. This track may be set in space as there is no ground below and there are stars out.

The course returns in Mario Kart 8 as a retro track. Little change has been done to this course, except for the stunning graphical changes to the course. The course is now a bit darker than the original, however, the course uses bright lights to create a stunning glow from the path. The Music Notes now look different, as they scrunch up their faces from the force of jumping up and down. There is now Music Notes at the very start, dancing.

Peach and Yoshi, driving on the giant piano.

Peach and Toad, on the giant tambourine. 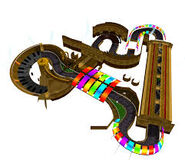 Toad, and several other characters, racing on the track.