Mute City is the fourth and last track of the Egg Cup in Mario Kart 8. This course is based on the F-Zero series.

Coins are not present naturally on this course, and can only be obtained by driving over the Recharge Pads, Item Boxes, or picking up the coins dropped by other players.

The staff ghost kart setup is Mario driving the Blue Falcon with Roller tires and the Super Glider.

The course twists a lot, and has tons of speed boosts. The only way to get coins in the track is to drive on the Recharge Pads on the sides of the track.

Right off the start, several boost pads and recharge paths (which gives them a maximum of ten coins) can be found. After a U-turn, the track begins to corkscrew before a large jump.

Afterward, the track continues on a cylindrical route that continues to twist before another jump leads into an opening in a building. Here, two more recharge paths can be found before the race continues outside. After a few turns, the track becomes a down hill drive past a rocket and a few signs depicting Captain Falcon before it arrives at the finish line.

A panoramic view of the track.

Peach turning a corner in the Blue Falcon.

Rosalina performs a trick while approaching the finish line. 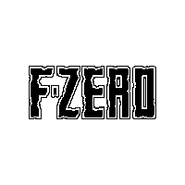