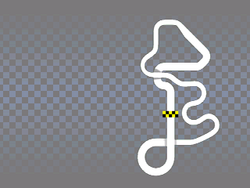 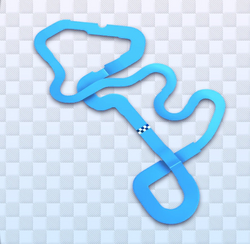 In Mario Kart 7, the staff ghost for this track is Metal Mario riding a Standard Kart, with Standard tires and a Super Glider, and the other has a time of 01:58.996 with Metal Mario driving the Blue Seven, with Monster wheels and a Paraglider.

In Mario Kart 8, the staff ghost kart for this track is Dry Bowser riding the Bone Rattler, with Metal tires and the Super Glider.

The race begins with a short turn to the left, followed by a squared-off 180° turn right with a line of item boxes, ultimately forming an S-bend. The track then slopes down into a tunnel, where racers must make a squared-off left turn. Straight ahead is the exit to the tunnel. Air coming out of pipes in the tunnel will push you around, making it harder to collect the coins scattered about.

A long left turn out of the tunnel follows, and after that, a winding narrow bridge with gates must be crossed. Next, a set of three treacherous switchbacks awaits, with sheer drops to the left and right. After this, you enter into a 270° left turn with oil slicks scattered about. Finally, a large glider pad is available for a path to the finish line.

The track returns in Mario Kart 8, as a DLC course, roughly being the same from Mario Kart 7. However, there are some changes done. A drop-off has been added at the entrance to the tunnel, the U-turn near the end has been modified into an anti-gravity section, the water puddles in that section are removed, and the air current found near the S-bend has been moved to behind the banner, instead of beside it. Also, the set of three coins after the second set of Item Boxes is now placed horizontally instead of one right after the other.

Metal Mario racing on the track.

Yoshi driving in one of the tunnels.

Bowser drifting around a corner.

Dry Bowser drifting around a corner.