The GameCube Controller is a controller used for the Nintendo GameCube, including the Mario Kart title of the console, Mario Kart: Double Dash!!.

With eight buttons and two joysticks, its design seems to be based slightly on the Nintendo 64 controller, but has noticeably more controls and a new and improved wing grip design. The standard GameCube controller was usually indigo, but character and game-themed controllers were also released, such as Mario, Luigi, Peach, and Super Smash Bros. Melee styled controllers.

This controller was bundled with all new GameCube systems throughout the console's life cycle and was also available separately.

In Mario Kart: Double Dash!!, the following controls are used:

The Mario Kart Wii instructions for the usage of the old-school controller. 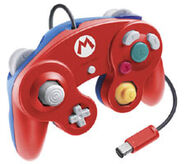 A red Mario GameCube controller, the originally designed one. 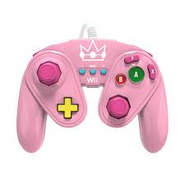 Peach's pink GameCube controller, for when you want to sacrifice all of your manhood.

Add a photo to this gallery
Retrieved from "https://mariokart.fandom.com/wiki/Nintendo_GameCube_controller?oldid=84707"
Community content is available under CC-BY-SA unless otherwise noted.