Sends everyone ahead of the user into an explosive spin that makes them drop their items.

The POW Block is one of three items introduced in Mario Kart Wii but does not make another appearance in later console Mario Kart games, the other two being the Mega Mushroom and Thunder Cloud. It is an item in the Mario Bros. franchise that when thrown on the ground will destroy all of the enemies on the screen. This item can be obtained from 5th to 9th place (with CPU controlled players also being able to obtain it in 10th place), but it is supposedly the rarest item in the game.

The POW Block is an attack and recovery Item. When activated, the POW Block will travel to all players ahead of you. It makes three warning crashes before delivering the final blow, in which the POW Block icon is completely flattened and shrinks into the distance, and all the racers stop, lose their items if they have any, and spin out, losing all of their speed. It takes them a long time to get up to their top speed afterwards. It is a great recovery item, because all the players in front of you are slowed down. The POW Block also appears in Coin Runners, where it affects the other team. It makes all members on that team lose half of thier Coins in addtion to their items.

The effects of this destructive item can be avoided. One way is to be off the ground when the POW Block unleashes its power. The other way is to shake the Wii Remote (if using Wii Wheel, Wii Remote held sideways or Wii Remote + Nunchuk), or press any direction on the D-Pad (if using Wii Classic Controller or GameCube Controller) at the moment the POW Block strikes. You will still spin out and lose any items that you might have, but you will do a trick and not lose any speed. In N64 Mario Raceway, the POW Block causes all the Piranha Plants on the ground to jump into the air.

Is Diddy Kong about to get POWed by the POW Block? 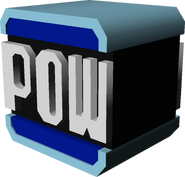 Baby Daisy is holding a Triple Red Shell behind her, with the POW Block about to strike.

Mario is about to POW Baby Peach and every other racer ahead of him. 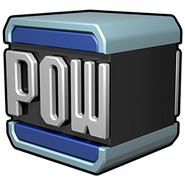 Retrieved from "https://mariokart.fandom.com/wiki/POW_Block?oldid=85200"
Community content is available under CC-BY-SA unless otherwise noted.