Heavy
Pink Gold Peach (ピンクゴールドピーチ) is an unlockable character in Mario Kart 8 and is playable from the start in Mario Kart 8 Deluxe. She is the pink golden counterpart of Princess Peach and is a heavyweight racer. She is unlocked after beating a random Grand Prix.

Pink Gold Peach happens to look exactly like Princess Peach as far as shape goes. Her dress can be made out, along with her elegant gloves, skirt, and brooch. She also has the same hairstyle as Peach, with bangs and a ponytail-- her crown and earrings, too. The only trait that separates Pink Gold Peach from the original is she's composed completely of pink gold.

Pink Gold Peach also has a special biker suit when driving Bikes. She has the identical features of Princess Peach when she is also changed into her suit, and has racing boots and gloves, along with the suit. Her hair and accessories are still present but are also upgraded with a scarf, like when she is in her dress, she has a rose gold appearance.

Pink Gold Peach is hated by several fans (Mainly YouTuber Nathaniel Bandy) of the series due to wasting a character slot with a clone character instead of a unique character. though she has been defended by the likes of YouTubers such as NicoBBQ & Bathaniel Nandy.

Pink Gold Peach in her Badwagon. 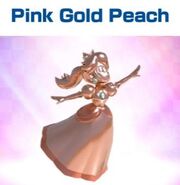