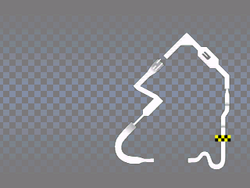 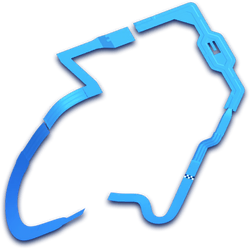 In Mario Kart 7, the staff ghost for this track in this version is Lakitu riding a Standard Kart, with Monster tires and a Super Glider, and the other has a time of 02:06.540 with Lakitu driving the Cloud 9, with Sponge wheels and a Paraglider.

In Mario Kart 8, the staff ghost for this track in this version is Ludwig riding a Jet Bike, with Slim tires and a Super Glider.

This course is loosely based on the underground levels of the original Super Mario Bros. on the NES. It features Piranha Plants, blue and normal Grand Goombas, waterfalls coming out of pipes, and fake cut-outs of Goombas and bushes from the 3DS game Super Mario 3D Land. The course begins in an area very similar to the overworld levels from the said game, then leads to three pipes that descend underground. A shallow stream of water runs through this part of the course, giving a slight speed boost to racers over it. Shortly afterward, the course splits around a Piranha Plant and then makes a few turns before heading underwater. After this, players exit by gliding, where they arrive at the overworld area once again and turn to see the finish line.

Piranha Plant Slide reappears as the second course of the Lightning Cup. The only major change is that the underwater pipeway has been redesigned, and now encompasses an anti-gravity section. Otherwise, this course has only been revamped graphically, with better graphics and shading.

The track near the starting line.

Mario, racing on the track.

Peach, gliding near the end of the track.
Add a photo to this gallery

Bowser, and several other characters racing on the track.

Toad, on the anti-gravity section.

The Stamp unlocked for beating the Staff Ghost on this course.
Add a photo to this gallery
Retrieved from "https://mariokart.fandom.com/wiki/Piranha_Plant_Slide?oldid=75608"
Community content is available under CC-BY-SA unless otherwise noted.