The Poltergust 4000 debuted in Mario Kart DS, as one of Luigi's karts, the others being the Standard LG, Streamliner. It is one of the 16 karts that are available from the start.

During gameplay, at first, only Luigi can use this kart. However, if the player can complete all Nitro Grand Prix cups in 150cc, it becomes open to Yoshi and Waluigi. Once all cups in Mirror Mode are completed, the Poltergust 4000 is open to all characters in the game.

Luigi's Poltergust 4000 is one of four ideal snaking karts; the others are Yoshi's Egg 1, Dry Bones's Dry Bomber, and R.O.B.'s ROB-BLS. This kart has high speed, acceleration, and handling, but low drift, weight, and items. These stats make the Poltergust ideal for snaking in the early-game, where the only other viable option is the Egg 1. It is fairly popular at all levels for having an excellent compromise between speed and handling compared to other karts.

However, since its attributes are squarely in-between many other karts, it faces heavy competition at the highest level of Time Trials and is the least seen out of the four ideal snaking karts. Some courses necessitate the Egg 1's consistency and Mini-Turbo length to maintain PRB for 3 laps, and often times, if top players want more speed, they will skip the Poltergust and immediately learn the course with the ROB-BLS. Despite this, the Poltergust is still able to hold records on courses such as GBA Peach Circuit, where the leniency of the Egg 1 isn't needed but the ROB-BLS cannot consistently perform.

When Luigi is using this kart, its weight is equivalent to Toad's Standard TD (when used by Toad), and Dry Bones's Banisher (when used by Dry Bones).

In Mario Kart Tour, there is a variant of the Poltergust 4000, the Ice-blue Poltergust (スノーバキューム Sunō Bakyūmu), which hence its name, is icy-blue colored, with silver details. It is equipped with a larger version of the Pipe Buggy's tires. It is the signature kart for Penguin Luigi. It is classified as a High-End kart. Unlike the Poltergust 4000, which offers longer slipstreams, the Icy-blue Poltergust increases the speed boosts and points resulted when driving over a Dash Panel.

This kart was exclusive to the Ice Tour, during the second week's spotlight, also including Penguin Luigi and the Blizzard Balloons.

Luigi driving his Poltergust 4000, racing with Peach in her Royale and Mario in his B Dasher while being squirted by a Blooper. 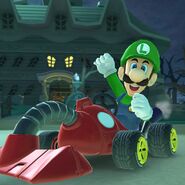 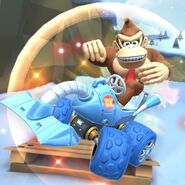 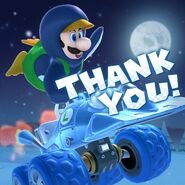 Penguin Luigi tricking on the Ice-blue Poltergust in N64 Frappe Snowland, as the "Thank You!" image for the Ice Tour from Mario Kart Tour Official Twitter.