A Porcupuffer (フグマンネン) is a type of large Cheep-Cheep found in many underwater levels of the Super Mario series. These huge fish are covered in spikes, making contact with them all the more deadly.

In the Mario Kart Arcade series, the Porcupuffer, known in the earlier two titles as the Needle Bomb (針爆弾), is an Item that can be used right at the start of the first two games and can be unlocked for the third. Their appearance varies and usage varies a little throughout the series, but their common goal of bursting tires remains the same.

Known in these two games as the Needle Bomb, the player can pick up these from an Item Hexagon. Once the driver has been horizontally following an enemy racer for a few seconds, the target will turn red, meaning it's all good to fire. Once an opponent is hit, their two right tires explode, making them lose control and speed. Unlike many Items found in Mario Kart Arcade GP and Mario Kart Arcade GP 2, the Needle Bomb will linger on the course until someone hits it.

Originally red with much longer spikes, the Needle Bomb, now referred to its common name, the Porcupuffer, takes on the standardized purple-ish, yellow-spiked look. It also takes on a new method of attack; the Porcupuffer now can be placed BEHIND the user's vehicle to cause damage from behind.(However, the puffer fish cannot be thrown forward anymore...)

Because Items can't be dragged behind your kart like they normally can in main-series Mario Kart there's just a few limited options to choose from... one is to have a Starman, Absorbing Mushroom, or other invincible Item on hand, and the other strategy is to simply be fast enough to keep away from any chance of being hit by it.

As a place-behind Item in Mario Kart Arcade GP DX, the Porcupuffer isn't as much of a threat as in the previous two games. Simply remember to not tailgate and stay out of the middle of the track. Like before, a Shield or Star will neutralize the Porcupuffer immediately.

Another pic of Mario with a Needle Bomb.

...and ANOTHER pic of the heroic plumber with the spiked fish. 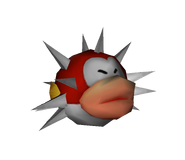 In-game 3D model for the Needle Bomb.
Add a photo to this gallery

The フグマンネン selected in the Item roulette.

Rosalina has received a valuable Porcupuffer...

"NEW" Porcupuffer unlocked!
Add a photo to this gallery
Retrieved from "https://mariokart.fandom.com/wiki/Porcupuffer?oldid=70458"
Community content is available under CC-BY-SA unless otherwise noted.