Princess Peach, originally referred to as simply Princess or Princess Toadstool in Super Mario Kart, Princess Peach Toadstool is a playable character in all the sixteen of the Mario Kart installments. Peach is the love-interest of Mario. She is also friends with Daisy, Luigi, Rosalina, Toad, and Toadette. She serves as the lead female in the Mario series. In Mario Kart 8, she, and Baby Peach return, and a metal counterpart of her, Pink Gold Peach, (who is similar to Metal Mario), is introduced in the series. She is the very kind and very beautiful ruler of the Mushroom Kingdom.

Princess Peach is the ruler of the Mushroom Kingdom, so that may answer your question on why she is a princess. Peach's dress in a royal shade of pink. It has hot pink lace on the bottom, and a short, dark pink skirt falls over her bottom. Underneath her dress, she has pair of high heels that are also pink (what color did you expect? She's all about pink). She has white, elegant, gloves over her hands. Her hair is long and blonde, with two long bangs on either side of her face. Peach's eyes are blue, and she has long eyelashes. Her jewelry consists of a golden chest piece with a blue gem in the center, earrings that also match her chest piece, and a golden crown (because you cannot be a princess without a crown. It just will not work) with rubies and sapphires encrusted in it.

After Mario Kart: Super Circuit, Princess Peach started wearing her hair in a pony tail instead of letting her hair down behind her back. Not a bad idea, actually.

In Mario Kart Wii, Peach, along with Princess Daisy and Rosalina, changes into a biker suit when driving bikes. Hers is correspondent in color with her dress, being outlined in pink. She has pink racing boots with white heels. Peach's suit is mainly white, but she has pink stripes going down her legs and arms, and a heart shaped icon is on her back. She has a pink belt, gloves, and scarf, and all her jewelry is the same as when she is in her dress. She returns in her biker outfit in Mario Kart 8.

Princess Peach is usually calm, peaceful, and friendly in Mario games, but in Mario Kart, she get quite an attitude of competition and harshness while driving. So don't be fooled by this princess's girly and harmless appearance, because you will regret it. Guaranteed. 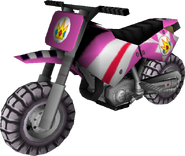 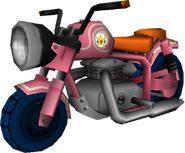