Professor Elvin Gadd (エルビン・ガッド博士), known more commonly as E. Gadd, is an inventor and scientific friend of Luigi and Mario. Luigi's Mansion for the Nintendo GameCube saw his first appearance, and ever since he has been a reoccurring character in the Mario series.

Despite his many appearances, E. Gadd has yet to make more than a small cameo in the Mario Kart series. Mario Kart DS almost featured him, but he eventually cut. Some of his inventions and a statue of him have made their way into the series.

Multiple sources confirm that Elvin Gadd would've been a playable racer in Mario Kart DS, but he was eventually scrapped and replaced by Dry Bones (so he likely would've been unlockable.) No model of E. Gadd or voice exists in the game... he used Toad's graphics and voice. Mario's game portrait and Kart were also used for the beta character. 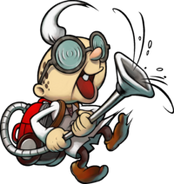 E. Gadd from Mario & Luigi: Partners in Time.
Add a photo to this gallery
Retrieved from "https://mariokart.fandom.com/wiki/Professor_E._Gadd?oldid=60357"
Community content is available under CC-BY-SA unless otherwise noted.