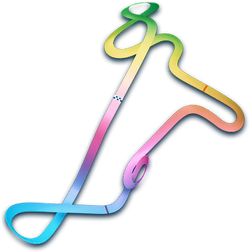 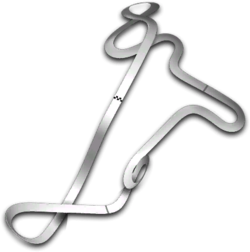 In Mario Kart 8, the staff ghost kart setup is Metal Mario riding the Standard ATV with the Monster tires and the Super Glider.

At 2 kilometers - which engenders laps that are two minutes long each - this course is the longest course in the game. It is a colorful course through the final frontier, while the original Rainbow Road featured a starry purplish sky instead. Its setting may have been switched to the deep space setting in order to help the console manage the track. With some of the most motivational and inspirational music in Mario Kart history, racers swerve past neon-lighted pictures of the eight playable characters, as well as various items from the series. Chain Chomps plague this otherwise peaceful course, traveling inside the road itself and knocking up racers they happen to collide with. Near the middle of the track, the course harbors a large, three-dimensional, smiling star.

This long course starts out with a large drop followed by a gentle uphill stretch, passing through a rainbow ring. From here, the path is mostly level with a few shallow drops here and there. Approaching the end, racers turn around in a corkscrew and then a twisting stretch to finally return to the checkered line.

It is possible to take a shortcut and skip about half of the course at the beginning. Right after the starting line, a racer can jump over the railing on the left while the track starts to slant downhill and land on a different part of the track.

Rainbow Road 64 has been heavily updated to the newest installment of the franchise, but with some unique and new features. Not only did the developers reuse the "square tiles" rainbow pattern used in Super Mario Kart, they also reused the city setting from the Double Dash version of Rainbow Road. This obviously cuts off with the "Final Frontier" setting of the original two versions but also proves the abilities of the new Nintendo console.

However, a massive difference in the layout is the fact that the "smiling star helix" has been switched from the original game to the MK8 version. In the new game, the loop points outwards with anti-gravity section, while in the original N64 game the loop was inside the track, towards the finish line. Also due to its length, the number of laps has been changed to one lap (divided into thirds), similar to the 3DS Rainbow Road. It is the first retro course to use this format. Rainbow Road also currently has the most physical on-stage coins out of any track in Mario Kart 8, at a shocking total of 62.

Other new additions include:

The course in Mario Kart 64.

The course's icon on the course select menu.

The big drop at the start of the track.

Metal Mario, Mario, and several other characters approaching the second checkpoint which can be seen at the background.

Rosalina, racing on the track.

This glitch breaks the lap counter. Go backward and when you reach the ramp, use a Mushroom and hop over the fence. Keep going back until you arrive at the first checkpoint. Once you passed the first checkpoint, turn around and drive the normal way like you normally would. The second checkpoint will trigger the second "lap" instead of the third one, and the end of the track will trigger the third "lap" instead of ending the race. This only works in Mario Kart 8 and PROBABLY only works with lightweight characters.

If you want to learn more information on how to do this glitch, watch this video: