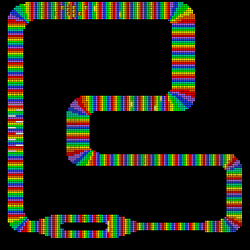 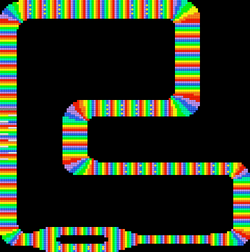 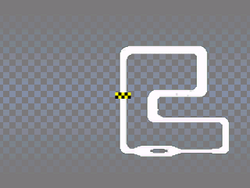 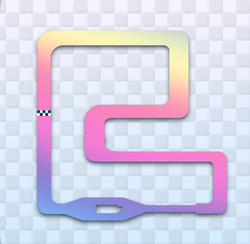 In Mario Kart 8, the staff ghost kart setup is Cat Peach driving a Cat Cruiser with Retro Off-Road tires and a Super Glider.

The track is the final course of the Special Cup in this game. It was, originally, considered to be the most challenging course at the time, despite having a fairly simple layout; it contains absolutely no guard rails, thin passageways with sharp, ninety-degree hairpin turns, and hazardous Thwomps that cause racers to spin out upon contact as well as being squished.

However, it is one of the best tracks to learn power-sliding in the Time Trial mode, thanks to the absence of guardrails and rainbow Thwomps to cause random spinouts, which impose the player to learn the perfect power-sliding techniques, curve per curve. Having the correct power-sliding pattern makes this track much easier in Grand Prix Mode by allowing the player to save not only the gained seconds from avoiding braking at every curve but also the precious seconds lost each time a driver falls off the track. Plus, the very colorful track setting and the powerful theme, allow for multiple tries without getting the player bored.

This track, along with all of the other tracks from Super Mario Kart, returns in Mario Kart: Super Circuit as the final course in the Extra Special Cup, with the Thwomps removed; however, it still remains a challenge due to the similar mechanics between the two games. Its music has a lighter tune after the intro. This is the only SNES track to have an original background, though it looks similar to GBA Rainbow Road's background Bowser's clown copter is replaced by the moon.

The track makes another return as a retro track in Mario Kart 7. It is the final track of the Lightning Cup. Besides the general decrease in difficulty due to the new turning mechanics and wider track layout overall, Rainbow Road now has added ramps to accommodate aerial tricks and has a different coin distribution. Additionally, the Thwomps (returning after an absence from MK:SC) create waves on the course which can be used to perform Jump Boosts. Also, the rainbow Thwomps have an updated appearance, as they are now mainly white.

The track appears again in Mario Kart 8 and Mario Kart 8 Deluxe as the second [DLC] track in the Triforce Cup, making it the only track in the entire Mario Kart series to date to actually appear in four distinct games, as well as the first Rainbow Road track not serving as the game's finale (final track of final cup).

The track's layout is similar to its appearance in Mario Kart 7, retaining the thwomp's shockwaves. The tile colors are nearly the same as they were in the original version, yet said tiles have a neon/LED backlit appearance (a feature N64 Rainbow Road reuses in this game's version). Their color pattern is reversed (racers went from purple tiles to red tiles, now they do the opposite), with the addition of an eighth color, cyan, between turquoise and blue. Finally, the tiles the Thwomps land on are now white.

The course itself is also wider and equipped with borders on the curves' outer edges. The forked road is also altered further, with the six-tile end of the hole filled in. The music is also remastered with a deeper pitch and additional instrumental sounds.

Rainbow Road reappears in Mario Kart Tour, mostly taking on the appearance of its Mario Kart 7 iteration, also re-using it's music. However, in this version, the ramp inside the second U-turn is absent, the hole in the road is even smaller than it was before, the last two Thwomps are further apart, the red tiling on the course and banner returns (in place of the pink ones in Mario Kart 7), the track edges are beveled, the track itself is thicker, and the arrow signs and Thwomp designs from the Mario Kart 8 rendition return, in addition, the Mario Kart Tour rendition is the first to have a large emphasis on taking place in outer space, as planets and asteroids can be seen floating around the course. 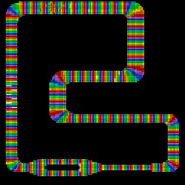 An overview of the track.

Luigi on the first U-turn.

Koopa Troopa on the third U-Turn.

Luigi on the first U-turn.

A bird's eye view of the track.

Lakitu and Donkey Kong racing on the track.

Yoshi near the forked road.

Cat Peach racing on the track. 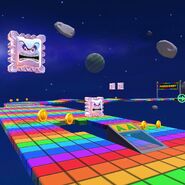