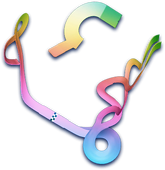 Rainbow Road, the last course of the Special Cup in Mario Kart 8 and Mario Kart 8 Deluxe. Unique from its predecessors, it takes place in a space station, which is given a new metallic design, as opposed to the transparent glass surface of previous games.

This incarnation returns to the classic three-lap format after Rainbow Road in Mario Kart 7 featured one long lap divided into three sections. This is a very unique Rainbow Road, taking place in a large space station and heavy use of the anti-gravity feature, as well as entirely different theme and a vast amount of futuristic design.

The road is made up by what appears to be long lines of solar panels, with the rainbow coming from starlight reflection. The colors are somewhat similar to the Rainbow Road from Mario Kart: Double Dash!!, with its prominent pink, magenta, and cyan shades.

The staff ghost kart setup is Pink Gold Peach driving the Comet with Slim wheels and the Super Glider.

The course starts with the rainbow-colored tiles. After a turn the drivers find the first anti-gravity section, that is 8-shaped. A gliding pad is found after the anti-gravity section and leads to the second space station with a large imprint of Mario's "M" emblem. It contains conveyor belts with opposite directions that changes over time, like Toad's Factory from Mario Kart Wii. At the end of the conveyor belts there is a slope with alternate Boosts (that turn on and off through time) and at the end of it are two gliding pads. Afterwards, the drivers are giving a boost through three mechanical Launch Stars that lead to two different anti-gravity paths.

These paths alter in height, so if the player falls from the highest one, they can simply land on the other one. The lower path offers drivers a shortcut if they stay to the right of the spin boost obstacle and go off the edge.[1] The player can see a Blooper-like spaceship orbiting around. Then the paths reunite each other and the anti-gravity section ends. A 180° turn with some Boost Pads at the outermost part, like in Mario Kart Stadium, and another turn make the track loop end. At the final 180° turn the player can see a hologram projection of the Special Cup Trophy as it appears in Mario Kart 8, but only in single-player mode. The racers then approach the start/finish line.

Toad, driving on an anti-gravity section.