These automatically lock onto and chase after the next Kart in front of the player. When hit, the Kart rolls over.

Knocks over any karts it hits or destroys an Item upon collision.

The Red Shell is an Item that has made its way into all the Mario Kart games. It is favored as a strong attack Item, as it almost always succeeds in knocking over an enemy driver.

Triple Red Shells, first introduced in Mario Kart 64, work the same as a single Red Shell. The only difference is that you receive three of them that revolve around your kart. In Mario Kart: Double Dash!! Triple Red Shells (and Triple Green Shells) are the Special Item of Koopa Troopa and Paratroopa. Petey Piranha and King Boo can use three Shells, too.

Red Shells, once released, will home in on an opponent ahead of the player and hit them. They can also be dragged behind the player. However, if the player are at the first place and firing it, the Red Shell will continuously cruise through the entire circuit until it collides with any racer or item that gets in the way. This only applies at Mario Kart 64.

The only exception to this rule is in Mario Kart: Double Dash!!, where the shells are carried rather than circled around a character's kart, either by juggling them or in a stack. Getting struck by another item will disrupt the character holding the shells, dropping all but one.

In Mario Kart: Super Circuit, Red Shells have an additional function. It can also be planted behind the racer instead of released forward. The shell will not rocket forward, but sit on the track, slowly rotating around. If another driver comes within range, the Red Shell will squeal three times and immediately smash into the racer- even if said racer was the one who set the shell on the track. This is useful for competitors sitting in first place, who have no one to target but the drivers trailing behind them. If a player is in first place, Red Shells do not target anyone; depending on the game, they either travel in a straight line or follow the track, until they hit an item or obstacle.

In Mario Kart 8 (and Mario Kart 8 Deluxe), Red Shells behave in the same manner as they did in the previous games. While playing on 200cc, Red Shells, when used, will approach the driver in front of them, but if the driver has any sort of speed boost, they can outrun the Shell until it either catches them or until it despawns.

In Mario Kart Tour, Red Shells are used similarly to how they're used in other games. However, on some of the Trick and Reverse/Trick tracks (like Mario Circuit R/T, Toad Circuit T, etc.), they can easily be destroyed by parts of the stage. They're usually obtained in the middle positions (2nd-6th), and Triple Red Shells either aren't or have yet to be in the game. There are certain gliders that will increase the player's chances of getting a Red Shell. Characters who can use three item slots in a race can receive a Red Shell Frenzy, which encircles the player's kart with Red Shells and making them invincible. The player can then fire off an unlimited amount of Red Shells at a time. When one of them are fired off during the Frenzy, they will hit anyone in front of the user as well as collide with walls. The Red Shells circling the kart will disappear one by one as the Frenzy ends.

A Red Shell is a part of the Lucky Seven item, and will home in on the kart in front of the user as long as nothing is in its way. 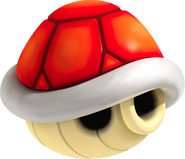 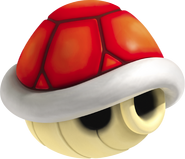 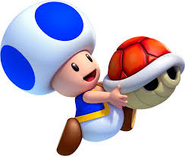 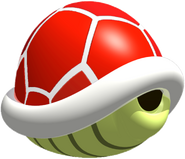 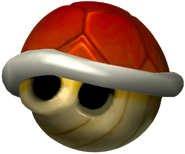 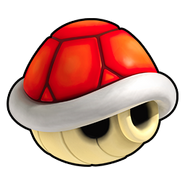 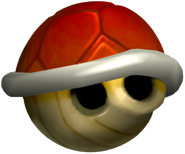 Red Shell (MKDD).
Add a photo to this gallery

Retrieved from "https://mariokart.fandom.com/wiki/Red_Shell?oldid=74654"
Community content is available under CC-BY-SA unless otherwise noted.