Roy Koopa makes his debut as a playable racer in Mario Kart 8. He is one of the seven Koopalings and is (in mainstream games) an enemy to Mario. He is a heavyweight racer and unlocked after completing a random Grand Prix. In New Super Mario Bros. Wii, he was the boss of World 2, and his attack was jumping, which sent shock waves that sunned Mario. He is the third oldest Koopaling in the Mario Kart series.

Roy Koopa is mainly yellow like all Koopa Troopas, but he is much larger. His hands and feet are razor sharp, and he wears dark black bands with silver spikes on them, just like Bowser. His mouth and chest are light brown, and his shell is purple, with pink outlining the spikes on it. Roy Koopa's head is pink, and he brandishes two sharp teeth. In New Super Mario Bros. Wii, he carries around a magic silver rod with a black center piece to shoot purple energy bursts at Mario and Luigi. He also sports a pair of hot pink shades, completing the whole dangerous and tough looking appearance.

This is Roy first appearance in the Mario Kart series. He is a Heavyweight racer, along with other Koopalings, Morton. He is a Staff Ghost in Grumble Volcano.

Roy is an unlockable character in Mario Kart Tour along with other Koopalings. He is being a ''Normal'' Character and his weight is possibly Heavy.

Roy and other Koopalings artwork in Mario Kart 8. 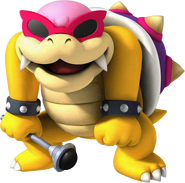 Roy do a Jump Boost in Grumble Volcano.

Roy in his Landship. 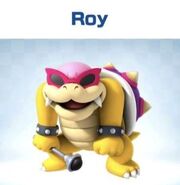