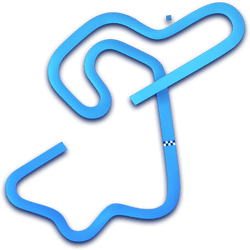 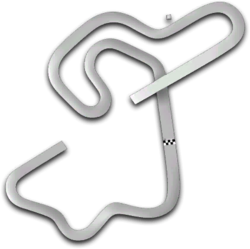 Royal Raceway, also known as Peach Circuit in the Japanese version, is the third track of the Star Cup in Mario Kart 64, and the third course in the Banana Cup in Mario Kart 8. The course takes place around Princess Peach's castle surrounded by a giant lake, reminiscent of its origins in Super Mario 64.

In Mario Kart 8, the staff ghost kart setup is Peach driving a Prancer, with Wood wheels and a Peach Parasol and the 200cc Ghost setup in Mario Kart 8 Deluxe is Baby Peach driving the Circuit Special with Cyber Slick tires and the Parafoil glider.

As the name implies, the track is intended as Princess Peach's "home" course. The track features many sharp turns that require precise drifting if the player wishes to post good times.

Many of these turns are highly banked and curve around water hazards. This forces the player to maintain a very disciplined path around the track, as going too high on the turns can lead to the player finding him/herself in deep grass, and going too low can result in falling in the water.

The first little bit of track isn't too technical with easy, wide turns. After about 1/4 of the track, the turns get narrower but should not cause too much trouble. Racers then enter a long bridge that leads to a big jump.

If players veer too far to the left or right after the jump, they will hit the two hills and possibly fall into the lake. The second to last turn is rather tight and players should be careful as the banking can easily slide them into the lake, before another S-bend back to the grid.

As an easter egg, Princess Peach's castle (as shown in Super Mario 64) and it's gardens can be found by taking a wrong turn on the track. The player can drive around the field, just as it is displayed in Super Mario 64.

However, there is no way to actually enter the castle, except through a glitch. Even then, all that happens is the kart falling through the front door into a pitch black room, before eventually hitting water. The character is then placed back on the main raceway before the "wrong" turn was taken. There is no known shortcut involving the castle. The Award Ceremony also takes place on the track where the top three drivers will receive their trophy.

Royal Raceway returns in Mario Kart 8 with a new, revamped appearance. No anti-gravitational sections have been added, but the giant ramp that boosts players over the water has been revamped; it's no longer a boost jump, but now a gliding section. The bridge was also made shorter.

Players can no longer drive around the castle, as there's now a giant black fence surrounding it (likely because they didn't want players wasting time online by checking out Peach's castle). The striped evergreen trees are now replaced with sakura trees. Also, the sky is now turned to normal blue, instead of the original version's pink. The music remains the same, but it is now updated with live instrumental sounds. The glitch has been fixed.

The twisting roads of the course.

Mario and Luigi driving around the castle during the award ceremony.

Daisy driving with her orange Standard ATV on Royal Raceway.

Pink Gold Peach in her Standard Kart, racing with Peach and Toadette on the track.

Peach posing on the course.

Lakitu, gliding past the princesses' balloons.