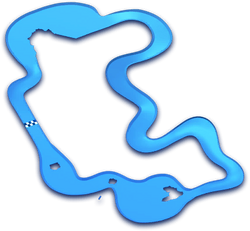 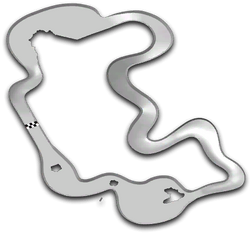 In Mario Kart: Double Dash!!, the staff ghost kart setup is Baby Mario and Baby Luigi riding a Goo-Goo Buggy with a time of 01:25.904.

In Mario Kart 8, the staff ghost kart setup is Lemmy driving the Sneeker with Standard tires and the Super Glider.

Shy Guys use this track as their skating rink, disregarding the racers and spinning them out should they come into contact. Near the end of the course, Freezies slide across the track, freezing any drivers who run into them.

Sherbet Land returns in Mario Kart 8 as a retro track. The course receives upgraded visuals as well as implementations of the new features. The skating rink area's pond can be driven inside via the underwater features, and a tunnel leads back to the main course by usage of anti-gravity.

In addition, after the tunnel, a hidden ramp can allow players to glide over the area with Freezies as well as another underwater tunnel to avoid the Freezies. However, unlike the Freezies in Double Dash!!, these ones don't freeze you. Hitting one of them causes them to break and for you to spin out like you've hit a banana. This course used to be playable as a battle stage, but was removed in Mario Kart 8 Deluxe.

The area filled with Shy Guys.

The area filled with Freezies.

Rosalina and Toad racing on the track.

The babies, at the Freezies' rink.