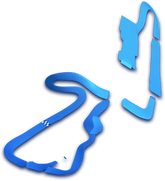 Shy Guy Falls is the final course of the Flower Cup in Mario Kart 8. It takes place in a cliff-side area with two waterfalls. Shy Guys can be seen mining throughout the course while players will drive up and down on waterfalls in an anti-gravity section, they also chant while mining.

The staff ghost kart setup is Shy Guy driving the Flame Rider with Retro Off-Road wheels and the Super Glider.

After driving down the waterfall, there is a gliding section leading to the next part of the track. If the player pulls their glider up, another path can be taken, which then jumps back to the main path. After, the track turns slightly to the left, through a small mine where the Shy Guys are working, then to the right, and is followed by two jumps. After the jumps, the player makes a right turn which leads to the finish line.

Many different colored Shy Guys racing in the Biddybuggy kart.

Peach, driving up the first waterfall.