The staff ghost setup is Daisy in the Power Flower.

The track is in the sky and is cloud-themed. On the sides of the tracks are tan-colored clouds which slow down the kart and may save one from falling off. Some jump pads can be seen here, and one of them allows players to pick up an Item Box. Vines are shown growing from underneath. The vines do not affect the racer but stop them as if they ran into a wall. These can be avoided as they are only at the edges of the course. There are many shortcuts here by cutting through clouds from ramps but are only possible by using one or two Mushrooms. You can still try them, but good luck making the jump. The one with the most impact is to use a Mushroom when going on the first small ramp which can save up to seven seconds of time.

This track returns in Mario Kart DS. The ultra shortcut is still there but must be placed after the ramp and not on the ramp. Mission 6-5 takes place here. Peach has to pass through 8 gates in order. 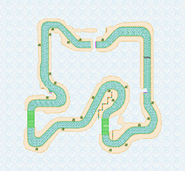 The track, as it is seen in Mario Kart DS. 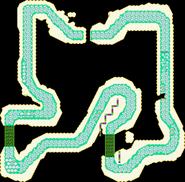 The map of the course in Mario Kart: Super Circuit.