The Spear, (known as the Torpedo outside North America) is a heavy bike in Mario Kart Wii. It can be unlocked by either unlocking 12 Expert Staff Ghosts in Time Trials, winning 200 WFC races, or playing 3,600 races.

The Spear takes on an aerodynamic appearance. The character's emblem is always on the front and the character's colors adorn the face of the Spear. Hence its PAL region-name, it actually resembles a torpedo from sunken ships or a blimp converted with a bike, and two pairs of dual-exhaust ports on each side. Its kart-counterpart is the Jetsetter.

The Spear is a bike for experts only. All about speed, the Spear supplies much of that, having the highest speed value in the game among bikes. Combined with wheelies, this makes the Spear the best vehicle bar none on straightaways. The bike also weighs a hefty amount, making it good to push medium and lightweight racers around.

Unfortunately, the rest of the Spear's other characteristics are extremely poor. Its handling is the worst in the game for bikes, and it has the shortest mini-turbo in the game among bikes, although its sheer speed helps compensate. Even in spite of the very small mini-turbo, players should still use its mini-turbo to good effect, since the burst of speed combined from a mini-turbo and wheelie is phenomenal. Its offroad is also the worst among bikes, making it so the player has to be careful on tracks littered with offroad areas. Its acceleration is also poor to the point where it would be better to simply charge up a mini-turbo idly, although it does best the Flame Runner in this regard. It also has a poor drift value, although it's not the poorest among bikes, and the Spear is one of two heavyweight bikes to have inside drifting, so the drift stat is somewhat remedied for.

The Spear dominates in time trials on tracks near-completely lacking sharp turns such as Luigi Circuit, Mario Circuit and Peach Beach. Combined with the speedy Funky Kong, the Spear has been known to win many world and regional record time trials on such courses. The poor drifting capabilities and small mini-turbo, however, make the Spear a terrible choice on tracks littered with sharp turns, such as Mario Circuit 3. Its lack of versatility with regards to sharp drifting tracks makes it less viable in online play than other bikes like the Mach Bike and Flame runner, which have exponentially sharper drifting and still boasting above-average speed. 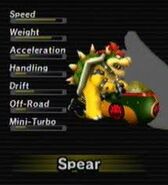 Bowser's Spear
Add a photo to this gallery

Retrieved from "https://mariokart.fandom.com/wiki/Spear?oldid=67331"
Community content is available under CC-BY-SA unless otherwise noted.