The Sprinter (B Dasher Mk. 2 outside of North America), is a medium-sized kart in Mario Kart Wii. It resembles a modeled Formula One Car. It is unlocked by unlocking 24 different expert Staff Ghosts, by playing 3,000 WFC races or by playing 4,650 races. Its speed and weight are very good, and drifting is average, but most other stats are rather low. Its bike counterpart is the Sneakster.

The Sprinter is one of the fastest vehicles in the game. It is the fastest medium vehicle, and it's only slower than the Spear and Jetsetter. Its weight and drift are around average, but the rest of its stats are rather low, which includes acceleration, handling, off-road, and mini-turbo. 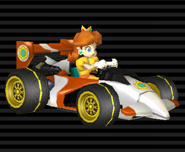 Diddy Kong in his sprinter. 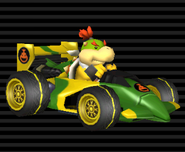 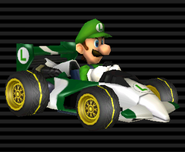 The Sprinter. As it looks in a K'NEX set.

Male Mii in his sprinter. 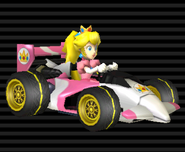