The Standard Kart S/M/L is different from the other Standard Karts in the Mario Kart series. It has a two-stroke twin cylinder engine with four exhaust pipes behind the kart. The kart's sound is strong and sports the character emblem on the front and a license plate on the back.

The bike variant of this kart is the Standard Bike M.

Almost every stat is average for this kart. Speed, weight, acceleration, handling, drift, and mini-turbo are in medium levels except for its off-road, which can make it difficult for players to speed up when off the road. 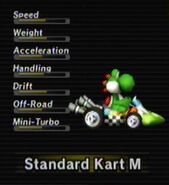 Yoshi in his Standard Kart M.
Deutsch
Community content is available under CC-BY-SA unless otherwise noted.