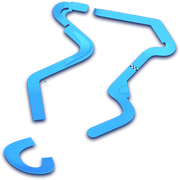 The staff ghost kart setup is Rosalina driving the Circuit Special with Standard tires and the Super Glider.

The course begins in a terminal. After a hairpin turn, players will exit the terminal by taking a jump onto the Tarmac. After this, there is a small jump over a conveyor belt, after which the track proceeds under a jetliner. Once passing under the jetliner, a ramp leads to a raised track which then turns left. The track then splits into two alternate paths; one where a jump can be taken onto the wing of a plane, proceed through it and come out on the other wing, or one where the jump is not taken so the player drives under the plane.

Shortly after, players will take a left turn, and then hit some boost panels leading to a gliding section. The gliding section acts like you have entered a cannon, as you can't change the direction of where you want to glide. The gilding section ends at a very short anti-gravity section suspended in the air, which loops around to another gliding section. Players will land on a track that goes straight and then turns left and re-enters the terminal. There is one last right turn to the finish line.

At the finish, on the right a board can be seen, including names of other tracks, being among others Dolphin Shoals and Sweet Sweet Canyon. On the screens around the inside of the airport, a list of departures to other courses, such as Shy Guy Falls and Thwomp Ruins, can be seen. Posters of Water Park can also be seen.

Characters taking off for a gliding section as a jetliner takes off above them.

Mario spin boosting on the anti-gravity portion of the track.