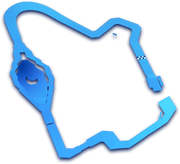 Thwomp Ruins is the final track of the Mushroom Cup in Mario Kart 8. The course takes place in a ruins area filled with caves and Thwomps.

The staff ghost kart setup is Donkey Kong driving the Varmint with Monster tires and the Super Glider.

The race starts outside, and after a straightaway, turns left twice. Next, there is a right turn that leads the player into a tunnel. Inside, players can either drive up the wall or stay on the main path which curves right, where Rollers roll out of a raised area. When the player exits the tunnel, they are confronted by many alternate paths. If the player takes the right or left turn, they can either stay on the main path where there is a Thwomp, or drive up the wall. If they drive straight, they can either drive in to the water and go right or left, or go drive up a ramp to a gliding pad.

The gliding pad is only accessible when a roller knocks the ramp into place in lap 2. Once the paths join up, players will enter the mouth of a Thwomp, which is also the entrance to another tunnel, and an anti-gravity section begins. There is then a right turn, which leads to the tunnel exit. After this, there are three more turns, and two Thwomps, leading to where there is a gliding section and a straightaway toward the finish line.

The flying section of Thwomp Ruins.

Iggy and Bowser race inside one of the track's tunnels.

The second glider portion of the track.