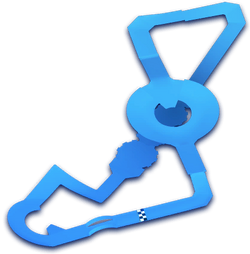 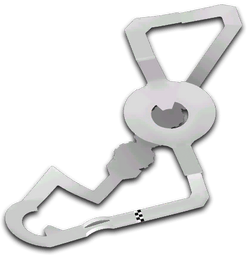 In Mario Kart DS, the staff ghost kart setup is Daisy in the Light Dancer.

In Mario Kart 8, the staff ghost kart setup is Iggy driving the Standard Bike with Monster tires and the Super Glider.

A portion of the track consists of horizontal moving gears. Driving on the part of the gear that's moving forward grants a speed boost. There are also some clocks where hands turn, clobbering any character that touches them. A giant clock in the middle has two hands. Bumping into the hands makes racers spin out. There is a pendulum that CPU racers often crash into because they don't acknowledge it.

Some parts of the track do not have railings, and heavy racers take advantage of these to knock characters off. Near the end, there are two vertical gears that boost speed if they're rotating forward. Also, there are 3 Missions in this course:

The course returns in Mario Kart 8. The course's graphics have vastly improved; extra clock parts have been added in the background. The start/finish line is now an alarm clock.

In terms of track changes, a second pendulum has been added before the four spinning wheels. An optional flying section was also added there, allowing the player to fly over the first wheel. Also, the clocks' hands can now be driven on, over a hole in the center of the clocks.

Mario driving on the clock.

Baby Luigi driving across the clock. 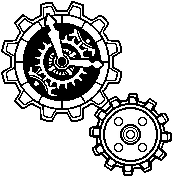