A time bomb, It goes off in 15 seconds. Hit other drivers to transfer the bomb to them.

The Time Bomb (時限爆弾) is an attack item found in the first 3 Mario Kart Arcade GP titles. Although its role varies from a standard to a special item throughout the arcade games, its basic tactic of latching onto vehicles and exploding remains the same throughout.

Using a Time Bomb strategically is a valuable skill to learn when playing Mario Kart arcade games. Pressing the item button sets off the timer of the bomb. While the 15 second timer is generous to the instigator, they need to be smart and activate it when nearby enemies can be seen. Otherwise, it might explode and stun THEM. Be sure and hit other Karts to pass off the bomb (sort of like a Thunder Cloud) so they can receive the effects.

If you don't want to handle a ticking Time Bomb, you also have the option of throwing it at the closest racer ahead. Wait for the target to lock onto them, and then throw it. And then, about 15 seconds later...

The "New!" Time Bomb chosen from the Item Select Screen. 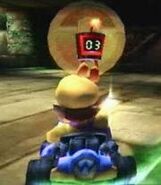 Wario with a Time Bomb.
Add a photo to this gallery
Retrieved from "https://mariokart.fandom.com/wiki/Time_Bomb?oldid=70140"
Community content is available under CC-BY-SA unless otherwise noted.