Toad is Princess Peach's loyal attendant, and he has appeared in almost all of the Mario Kart games up to date, with the exception of Mario Kart Arcade GP VR. Similar to Toadette, Toad is a lightweight driver in every game and therefore quick off the mark. His karts usually have an extra kick to their drift, allowing him to swerve past sharp turns with ease. To unlock him in Mario Kart: Double Dash!!, win the 100cc Special Cup. His special item (which he shares with Toadette) in that game is the Golden Mushroom (which was then known as the Super Mushroom).

Toad is the brother of Toadette (confirmed in the Mario Kart Wii guidebook only), and he is a good friend of Mario, Luigi, Peach, Daisy, and Yoshi. Like the other heroes, Toad views Bowser as an enemy. Toad has many colors, however they are only spectators. The only color playable is the red and blue toad. Toad also has an second name, like his sister Toadette. Again, his name is Kinopio キノピオ in Japanese.

Toad is a small little guy in the Mario series. He has a white mushroom hat with big red dots on it on top of his head. This is because he is from the Mushroom Kingdom. Despite having an appearance similar to many other Toads from the Mushroom Kingdom, he is often referred to as a close buddy of Mario's and is seen to being a loyal friend to those he's friends with. He has big brown shoes and a blue vest. Also, he has a happy, memorable face.

Toad in his Quacker. 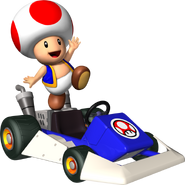 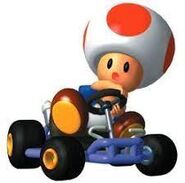