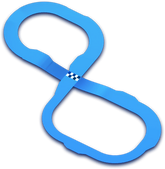 In Mario Kart 8, the staff ghost kart setup is Toad riding the Standard Bike with Standard tires and the Parachute glider.

The track consists of a closed off highway in a figure-8 shape. A few parking spaces along the edge have a line of Item Boxes, so those supply really well. At one point in the middle, the track drops slowly so that the bridge can pass over it. It is crowded with traffic, and even just slightly tapping a vehicle will send you into the air. Also, they can be very unmerciful, as you can keep hitting them over and over again, like the Rainbow Thwomps on SNES Rainbow Road.

If this track is played on the unlockable Extra Mode, the difficulty level peaks; the cars now come straight at racers, so quick reflexes are needed. This also prevents the possibility of cutting any corners, unless there just happens to be no traffic. Getting hit by four vehicles in a row (Bus>Truck>car>Semi Truck) will stop your progress for a maximum of 20 seconds. Although quite rare, there is a moment where you will be caught by four vehicles in a row without any means to escape (Unless you have Boo or Starman at disposal) especially if you are in the middle of the road.

Even on normal Grand Prix, the cars are a constant nuisance and can turn around races quickly if racers are unfortunate enough to get caught in the traffic, and as such, despite its placement in only the second cup of the game, it is often considered one of the most difficult tracks in the game.

Toad's Turnpike returns in Mario Kart 8 as the final course of the retro Shell Cup. It still retains the basic premise of a figure-8, but with some added features/vehicles. Throughout most of the turning sections, Anti-gravitational pads are added to the walls, which are equipped with Dash Panels. There are now also vehicles with Glide Panels on their backs, ramp-equipped trucks that can extend flight, cars carrying small ramps that allow for Tricking, and the vehicles from the original have been replaced with more modern ones with character and cup advertisements. It used to be a playable stage in Balloon Battle, but was removed in the Deluxe version.

Peach driving on the course.

The first stretch of the track.

Going under the overpass in Toad's Turnpike.

The second stretch of the track.

The start of the track.

Luigi and Wario on an anti-gravity section.