Toadette is unavailable in the Mario Kart Arcade GP series.

Toadette first appears in Mario Kart: Double Dash!!, where she is Toad's racing partner and an unlockable character, and they are both unlocked by winning the 100cc Special Cup. She also has her own kart, the Toadette Kart, which is unlocked after winning the Mirror Mode Mushroom Cup. Toadette and Toad are lightweights and their Special Item is the Golden Mushroom.

Although Toadette doesn't physically appear in Mario Kart Arcade GP 2, she gets a cameo in Yoshi Park 2 where large paper cutouts of her, Toad, and Toadsworth appear in the Trick House.

Toadette returns in Mario Kart Wii as an unlockable character. She is unlocked when the player has played all 32 courses in the Time Trials mode, has won 1,000 WFC races, or played a total of 2,550 races. Toadette is a lightweight racer, and she is able to use all lightweight karts and bikes in a white and magenta color to reference her style. She gets an off-road bonus, the only lightweight to do so, and a slight speed bonus, which is shared with Rosalina, Baby Peach, and the player's Mii.

In Mario Kart 8, Toadette can be unlocked by completing a random Grand Prix. Stat-wise, Toadette is one of the heavier lightweights (along with Toad, Koopa Troopa, Shy Guy, Lakitu, Larry, Wendy, and Isabelle]]), outweighing Lemmy Koopa and all five baby characters, but she's still lighter than Peach, Daisy, and Yoshi.

Toadette, Rosalina, and Wendy all make an appearance on two of the four "Womeen of Racing Organization" posters seen on Royal Raceway. She is also the Normal Staff Ghost for Toad Harbor.

In Mario Kart 8 Deluxe, all of the characters from Mario Kart 8 are returned, including Toadette. She is unlocked from the start and shares her stats with Wendy and Isabelle. She is the 200cc Staff Ghost for Toad's Turnpike.

Toadette is a Toad, so she is adorned in pink. She has brown shoes, looking the same as Toad's, but their clothing is different. They wear a short, pink dress with a white outline, and their vest is red with gold trim. The mushroom on their head is also pink with large white dots, and they have pink mushroom hair that goes down their back. They have the same memorable, happy face as Toad. 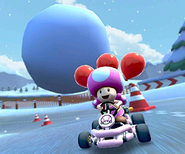 Toadette driving in front of a snowball in Mario Kart Tour
Deutsch
Community content is available under CC-BY-SA unless otherwise noted.