When thrown, these shells travels in a straight line and knocks over the first Kart it hits.

The Triple Green Shell, the classic attack Item in Mario Kart, made its debut appearance in Mario Kart 64, and since then, it has came back as an Item in every Mario Kart game. They affect the players the same way as the Green Shell, however, there is three of them and they also rotate around the kart. In Mario Kart: Double Dash!! Triple Green Shells (and Triple Red Shells) are the Special Item of Koopa Troopa and Paratroopa. Petey Piranha and King Boo can use three Shells, too.

The Triple Green Shell is mainly used for as a basic offensive Item. A racer can throw them in front of them at an opponent, and it will speed through the track in a straight line until: 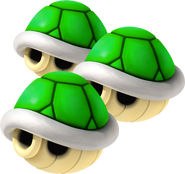 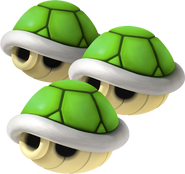 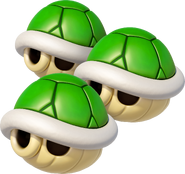 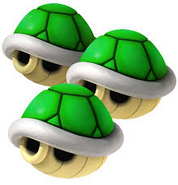 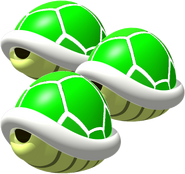 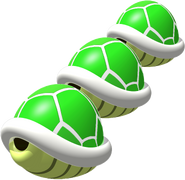 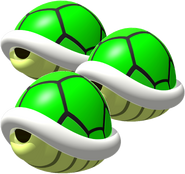 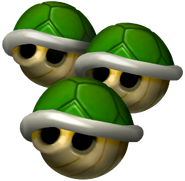 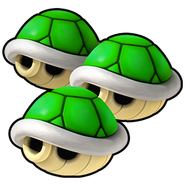 Item icon from Mario Kart Wii.
Add a photo to this gallery
Retrieved from "https://mariokart.fandom.com/wiki/Triple_Green_Shell?oldid=69198"
Community content is available under CC-BY-SA unless otherwise noted.