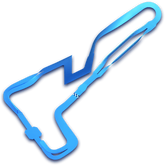 Twisted Mansion is the third course of the Flower Cup in Mario Kart 8. This course takes place in and around a haunted mansion inhabited by many Boos.

The staff ghost kart setup is Luigi driving the Mach 8 with Slim wheels and the Super Glider.

In Mario Kart 8 Deluxe, the staff ghost is King Boo Driving the same kart Luigi does.

At the starting line, the player starts in the courtyard, where a large statue of Boohemoth can be seen. Once the player drives inside, they drive into an anti-gravity section that leads through the dining room.

At the dining room, the track splits and the player can drive on either wall. The player then goes to the library area and then drifts all the way down to an underwater section through an arch shaped like Bouldergeist's head.

The underwater section doubles with anti-gravity, eventually splitting into two paths. Here, Fishbones can be seen, but they cannot be interacted with. The right route leads to a higher boost pad than the lower. It then leads to a gliding section across a courtyard similar to the one in Luigi's Mansion.

If the players take the upper route, they can land on a balcony and take a shorter route, whereas the lower one must climb a flight of stairs. They then exit the house, which leaves the final stretch to the finish line. Here, some hammer-wielding knight statues are being possessed by Boos.

Luigi driving on the anti-gravity section of Twisted Mansion.

Mario racing by himself in a Time Trial run of the course.