Vanilla Lake 1 is the third track in the Star Cup in Super Mario Kart. Its notable features include a large area of opened ice where racers can fall into and ice blocks that can get in the racer's way. This course has not appeared in a recent Mario Kart game yet.

This track returns in Mario Kart: Super Circuit with the pipes removed and has the GBA Snow Land background.

The track is essentially a circle trapped inside a square and instead of grassy areas lining the road to slow you down there is thick snow. A large group of Item Blocks lay right past the first turn, prepping the Item mayhem right off the bat. There are also pipes that serve as obstacles, but the main problem you'll probably run into is the large buildup of ice blocks that cancel out all Acceleration and can even bounce you back.

Although there's nothing too large, there are a few patches of snow that can be cut across by using a Mushroom or Starman. 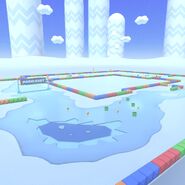 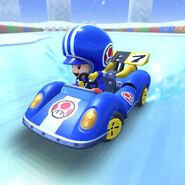