First appearing in Mario Tennis 64, Luigi's tall, skinny purple nemesis rivals the green goober's strong abilities across the board. In fact, Waluigi even improves on Luigi in some respects. His karts, too, are some of the craziest around. Waluigi is known to be sneaky. In Mario Kart Wii, Waluigi has good drift and acceleration stats making him good in Grand Prix and VS. Although not confirmed, he is assumed to be Wario's brother.

Waluigi is Luigi's rival, just as his good friend Wario, his accomplice, is Mario's enemy. He has orange shoes that end in points. Like Mario, Luigi, and Wario, he sports overalls with two golden buttons on them. His overalls have a dark purple/navy tint to them, and he also wears a long-sleeved purple shirt. His white gloves have a Г symbol on them, hinting that he is the opposite of Luigi, whose logo is an L. His hair is a stunning tannish brown color, yet he has a long, pointy black mustache that curves upward. His nose is pink, similar, to Wario's, his ears are pointed, and he always has an evil grin on his face, implying that he is a dangerous racer in Mario Kart. And then, like all the other characters with overalls, he has is own specially made purple hat that has a yellow Г symbol over a white circle, similar to his gloves. Waluigi is a lot skinnier and taller than his enemy, Luigi. So you can imagine how overweight he makes Mario and Wario look. Waluigi's so tall and lanky, most bikes seem too small for him, hence his weight changes throughout the series. 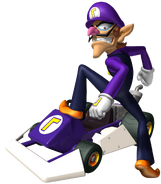 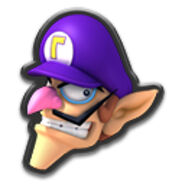 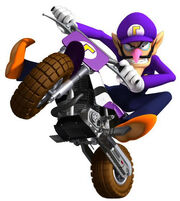 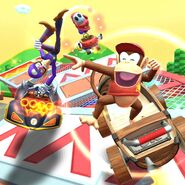 Add a photo to this gallery
Retrieved from "https://mariokart.fandom.com/wiki/Waluigi?oldid=85203"
Community content is available under CC-BY-SA unless otherwise noted.