Wario is a character in the Mario series. He made his official debut in the Mario Kart series as a playable character in Mario Kart 64. Wario's dirty tricks bring him dangerously close to disqualification but despite his nasty nature, Wario somehow is always greenlit for the seasons that follow. Wario is the counterpart to Waluigi. Wario is always classed as a heavyweight in the Mario Kart games following Super Mario Kart (in which he did not appear) due to being overweight and fat, sort of like Bowser. He is one of the rivals to Mario.

In Mario Kart 64, Wario is a heavyweight racer. He gets his own personal course, Wario Stadium.

In Mario Kart: Super Circuit, Wario is a heavyweight racer with good speed and weight, but low acceleration, sharing stats with Donkey Kong.

In Mario Kart: Double Dash!!, Wario's default team partner is Waluigi. Wario's personal kart is the Wario Car, which excels in speed and weight but lowers acceleration. He gets his own personal course in the Special Cup, Wario Colosseum.

In Mario Kart DS, Wario's main karts are the Brute, Standard WR, and the Dragonfly. His karts excel in top speed and weight, whilst most other stats are balanced or below average. Wario's personal course in the Special Cup is Wario Stadium, which heavily differs from the Mario Kart 64 track.

In Mario Kart Wii, Wario is one of the Large-sized racers, due to his overweight size. This is the first game in the series where Wario's main color is yellow, while his secondary color is purple. Wario owns a gold mine, which is a track in the Flower Cup.

Wario returns in Mario Kart 7 for the Nintendo 3DS. He is now an unlockable racer instead of a default racer. Wario excels in top speed and weight, but hinders acceleration, handling and off-road, sharing these traits with Bowser, Metal Mario and Honey Queen. Wario's signature kart appears to be the Bruiser, and his personal course in the game is Wario Shipyard.

He reappears in Mario Kart 8 and Mario Kart 8 Deluxe unlocked from the start like he is in most games. Like Mario Kart Wii, his signature color is yellow with his secondary color being purple. His signature kart appears to be the Badwagon. His personal course in the game is the fan-favorite, Mount Wario.

He also appeared in the Mario Kart GP series, being a from the start character in the first one. Waluigi does not appear though.

In the second arcade game, Wario is classed as an expert character, along with Donkey Kong and Bowser. Waluigi appears this time though.

Wario is Mario's rival. You probably guessed that already, considering their names are just a letter apart. He is a bit fatter than Mario, and he dressed in the same style. He wears green slippers and dons purple overalls with two silver buttons on them. Unlike his body, his arms are in shape, and his muscles can be seen underneath his yellow shirt. He has a pair of white gloves, both of them having a purple W on them. He has black eyebrows and a mustache, which is curves a lot. He has a large pink nose and pointy ears, and like Mario, his hair is brown. His slits around his eyes are a light blue, and he has a yellow cap with his initial (W) on it in purple. Basically, he is the bad version of Mario. He also was the star of WarioWare and Wario Land. In his early Mario Kart appearances, he wore a long-sleeved shirt, but in future Mario Kart games, he wore a short-sleeved shirt. He also loves money and gold, in fact, he probably does not even pay the employees of his company, WarioWare Inc.

Wario And Rosalina Racing In Wario Gold Mine 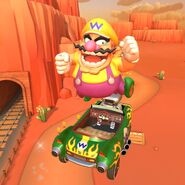 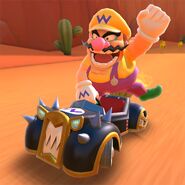