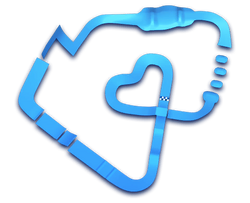 In Mario Kart DS, the staff ghost kart setup is Wario in the Brute.

In Mario Kart 8, the staff ghost kart setup is Wario driving the Tri-Speeder with Off-Road wheels and the Wario Wing.

With multiple floors of stadium seating, neon-light signs, and of course the thrilling ramps, Wario Stadium does a nice job of capturing Wario's exhilarant and daredevil demeanor. The track starts out with a series of curves and turns, which ultimately make a heart-shaped road design. After this, a large jump-laden with Item Boxes and a Boost Pad comes up, followed by a 90-degree curve to the left. A wide field of squelching mud lays ahead, and as trying to drive through it would take forever, four small dirt hills with Boost Pads lie across the muddy plain to help players pass with Speed, but they have to stay in line with them, or they could end up stuck in the off-road... Another left turn comes after this, slightly more than ninety degrees. Two large ramps with Boost Pads are up next, with rings of fire circling around in the air. Aerial control is needed to pass safely through the center of them.

Turning slightly to the right, a second muddy plain comes up, and this time, a wide, zigzagging dirt path is available to cross it. The only problem is two large, three-pronged Podoboo Cogs rotating on the edge of the road- so you can play it safe and go down the middle, or try to save as much time by going on the edge and risking being burned... Three ascending ramps follow up the next left turn, and a 1-Kart wide Boost Pad alternates the edges of the hills, right left right. So, you can opt which boosts panels you want to take, 1 or 2 of them. .3 large terraces make the straightway a little more interesting, and then it starts narrowing out. 6 small bumps in the road follow, which makes a good Drift for the next 180-degree turn very hard, so hard that racers might just spin off into an outlying patch of mud if not careful enough. Finally, one more ramp equipped with Dash Panel, and then the finish line follows afterward.

This track re-appears in Mario Kart 8 as the first track in the Leaf Cup. The race now happens during the day, while the original version happened at night. There is an added anti-gravity section, as well as added flying and underwater sections. A big Wario statue now stands in the center of the stadium, and the track is now a little bit shorter, as a few of the ramps towards the end (and the final turn) have been removed. 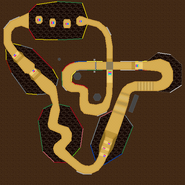 Wario racing on the track.

Waluigi racing on the track.

Wario near the finish line.

Wario performs a trick at the end of the anti-gravity portion of the track.