Wendy O. Koopa is a racer in Mario Kart 8 and Mario Kart 8 Deluxe. She is one of the seven Koopalings, all of which make their debut in the aforementioned game. She is unlocked by completing a random Grand Prix.

She is voiced by Ashley Flannegan.

Wendy O. Koopa first appeared in Super Mario Bros. 3 for the NES console, of course. She was a boss in the 3rd world, and her attack move was shooting giant gold rings that bounce all over the place. Oh, yeah, and they hurt you. Wendy O. Koopa, the only girl Koopa in the Koopalings, is most likely Bowser's favorite child, which is offending to the other Koopalings.

Wendy O. Koopa is about as bratty as you are gonna get. Seriously, she is even more sassy than Princess Daisy. Her body is yellow, just like all the Koopas', and she wears pink high heels (Oh-no, Peach has some competition for fashion!) She has a tan, plated chest, and she adorns a red, beaded necklace. She has two golden ring bracelets, and her shell is bright pink, with her spikes being outlined in gray. She's got pink lips and a big, pink and white spotted bow on top of her head. And she's always got that "I'm gonna take you out with a Bob-omb!" look on her face. Wendy O. Koopa isn't afraid too, either. 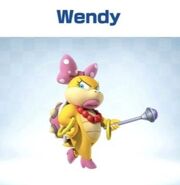