The Wii is the fifth home console developed by Nintendo, released in 2006. The main difference between the Wii and other Nintendo consoles is the wireless controller, known as the Wii Remote, which is used to connect the players movements and the character's movements together.

The Wii, being a seventh-generation console, competes with other seventh-generation consoles such as the Xbox 360 and the PlayStation 3. Since the release of the Wii, the system has outsold other consoles in this generation. Nintendo later produced an alternative color of black. A second alternative color, red, was produced in 2010, and bundled with the game New Super Mario Bros. Wii came out.

The first version of the console and the Wii Family Edition were discontinued on October 21, 2013, while the Wii Mini was discontinued worldwide on November 13, 2017.

The Wii succeeded the GameCube and was succeeded by the Wii U in 2012.

The Wii Remote, unofficially called the WiiMote, is the main controller used with the Wii. The Wii Remote is rectangular in shape and resembles a TV remote. It contains eight buttons and a directional pad as well. Unlike previous console controllers, the Wii Remote includes a power button that has the ability to turn the console on without pressing the power button on the hardware.

The Nunchuk is the controller that comes with the Wii and is used for 3D navigation games (most of the time), such as Super Mario Galaxy. The Nunchuk has 2 buttons (C and Z), a joystick and a cable to plug into the Wii remote. 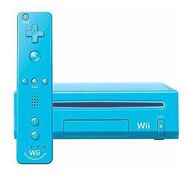 The packaging of the Red Wii.
Add a photo to this gallery

Retrieved from "https://mariokart.fandom.com/wiki/Wii?oldid=77248"
Community content is available under CC-BY-SA unless otherwise noted.