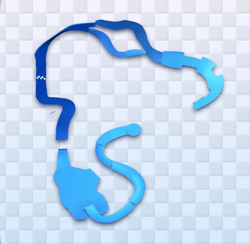 The staff ghost kart setup is male Villager driving the Streetle with Leaf tires and the Paper Glider.

The track starts out in anti-gravity, going up a tree. After going forward a bit, racers will reach a fork in the road. The left track has coins scattered through the road, while the right allows racers to perform many tricks. After this, the track passes through a small village, where numerous Shy Guys live.

After gliding over a large void and reach a circular platform, the boardwalk continues once racers have landed there. Taking a slight bend to the left, racers drop from the boardwalk to a passage with water running down the center, similar to Koopa Cape. Racers then exit the passage and fall to a shallow pond. It has enormous leaves floating with Boost Pads on them so that players can perform tricks.

After the pond, the racer will find the last ramp to jump over and land directly to another boardwalk over an anti-gravity pad. The track makes a slight detour to the left, which is also the last bend that leads the player back to the starting line.

A view of the course at the start of a race.

A male Villager performing a trick.

A male Villager at the track's glider portion.

Dry Bowser at the pond portion of the track.