Yoshi is a green dinosaur-like character from the Mushroom Kingdom. He wears orange shoes with yellow bottoms. His hands, body, tail, and head are all a light shade of green. His chest and mouth area are white in color, though. Although he has never been seen without shoes, Boshi's appearance in Super Mario RPG: Legend of Seven Stars as well as the feet of the Yoshi Sphinx in Paper Mario Sticker Star confirms that Yoshi has three clawed toes on each foot and padded feet. Along with his head having orange spikes. He has a red shell that has a white rim on his back. Some of his powers include flying and devouring enemies with his long tongue. 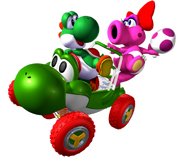 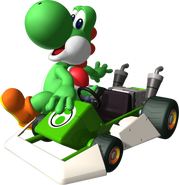 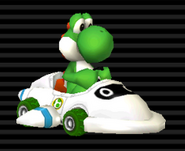 Yoshi in his Super Blooper.

Yoshi in his Cucumber at Mario Kart DS.

Yoshi racing in his own track, Yoshi Falls.

Yoshi do a Jump Boost in Yoshi Valley. 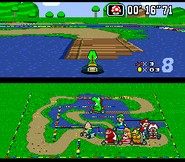 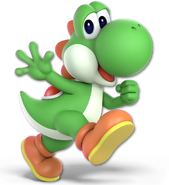