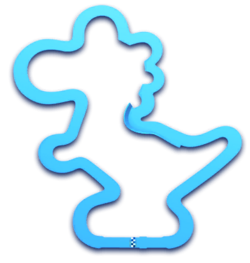 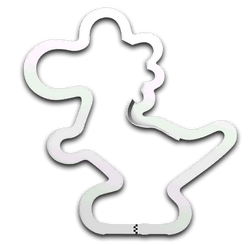 In Mario Kart: Double Dash!!, the staff ghost kart setup is Yoshi and Birdo riding a Turbo Yoshi with a time of 01:59.886.

In Mario Kart DS, the staff ghost kart setup is Yoshi in the Standard YS.

In Mario Kart 8, the staff ghost kart setup is a Red Yoshi riding the B Dasher with Standard tires and the Super Glider.

The course makes its first appearance in this game. There are many Piranha Plants in this area. The music is the same as the game's Mario Circuit and Luigi Circuit. There are also many tight curves in this track, especially on the tail turn. Daisy Cruiser can be seen in the background.

This track returns in Mario Kart DS. It is the final track in the Lightning Cup. The underground path has been removed, but the creek shortcut is still able to use. This is one of the most technical courses in the whole Mario Kart series.

This track returns in Mario Kart 8 and Mario Kart 8 Deluxe as the first track of the Egg Cup. It has received many major visual upgrades around the track, even rocks out at sea are shaped like Yoshi's head and another shaped like a Yoshi egg. Also, at the start/finish line, the giant rock which marks the shoe area has been turned into a little town with a harbor nearby which caused the three Piranha Plants near the finish line in the original to be taken out. The first underground path from the original is still removed.

This glitch only works for Mario Kart DS.

Drive to the water and jump into it the first time you see it. Once Lakitu puts you back on the track, turn around and jump back into the water next to the fence. Then, if done correctly, Lakitu will put you before the finish line. If that is the case, go ahead and turn around and drive backwards. You will notice that Lakitu is not telling you to drive the right way. Drive the wrong way until Lakitu tells you not to do so, and then turn around and drive the right way. However, at one point of the track Lakitu will tell you that you are going the wrong way. Keep driving forward, no matter what Lakitu tells you, and if done correctly, you will complete a lap.

Donkey Kong and Diddy Kong at the start of the track.

A helicopter based on the Yoshi's Island transformation can be seen. 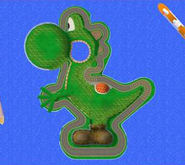 An overview of the track.
Add a photo to this gallery 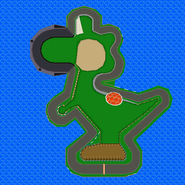 The track in Mario Kart DS.

Peach, Yoshi, Luigi, and Toad, racing on the track.

Mario, racing on the track.
Add a photo to this gallery

Roy and Iggy racing on the track.

Daisy, drifting around the corner before the waterfall.

Rosalina and Metal Mario, at the other side of the waterfall.

Link, doing the inward drifting on the otherside
Add a photo to this gallery
Retrieved from "https://mariokart.fandom.com/wiki/Yoshi_Circuit?oldid=84837"
Community content is available under CC-BY-SA unless otherwise noted.