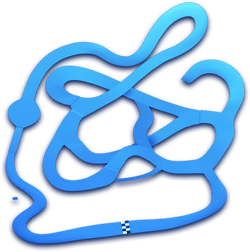 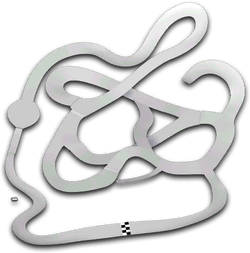 In Mario Kart 8, the staff ghost kart setup is Yoshi riding the Wild Wiggler with Standard wheels and the Flower Glider.

The course starts out on a dirt road with grass on the sides, like DK's Jungle Parkway. After a bit, it transitions into a winding maze of roads on cliffs. These paths are very hard to navigate, even if players are with another person. Adding to the difficulty is multiple Porcupines sprawled over sections of the road, and your only option really is to drive through them and hope that you don't get hit. The paths eventually meet, and after a few turns, there is a bridge which takes players back to the dirt road. Shortly after, the finish line is reached. The course itself has few railings. If players fall off a cliff, they will roll down the hill for a long time. Lakitu will pick them up after they roll all the way down to the bottom, making falls more costly than normal.

Before the bridge, there is a giant Yoshi Egg that spins across a small area. If it rolls over a player, he or she will be flattened, like a player run over a Thwomp or a Mega Mushroom. However, AI-controlled characters cannot be flattened by it. Also, there are black porcupines on some paths that will make one spin out if hit.

The confusing part of this track is that there is no telling who is in which place. Because there are so many different pathways that take the player to different parts of the course, the game simply replaces the usual positions with question marks, only revealing the standings for a racer after he or she has crossed the finish line.

The track returns in Mario Kart 8 as the last course in the Leaf Cup. It receives upgraded visuals as well as several details for aesthetics. More paths have been added to the new retro track. In addition, the course features a cannon, which is also a hang glider section, on one of the course's paths, and the Porcupines have been replaced with Goombas. Also, more guardrails have been placed throughout the track because of how infamous it originally was. Places are shown during the race this time. The long falls from falling off the cliff are gone because Lakitu picks them up quicker. The course used to be a battle stage but was removed in Mario Kart 8 Deluxe.

The entry to the maze.

Yoshi racing on the course.

Rosalina, and Metal Mario racing on the track, while also approaching the giant egg.